What Is Carb Cycling? – Cleveland Clinic 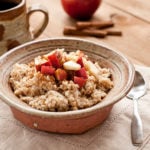 The “carb cycling” diet is all about building energy. It’s well-tailored for anyone in the midst of high-intensity training or competition. If that’s not you … well, maybe pass on that second bowl of pasta.

Cleveland Clinic is a non-profit academic medical center. Advertising on our site helps support our mission. We do not endorse non-Cleveland Clinic products or services. Policy

The short-term diet is especially good for endurance athletes who want to maintain or lose weight while optimizing their energy. It’s all about eating carbohydrate-rich food that provides the right fuel at the right time for peak performance.

As you might have guessed, carb cycling is NOT a weight-loss program. It shouldn’t be on the table for casual fitness buffs, either, says sports health dietitian Kate Patton, RD.

So, who can benefit from carb cycling and how does the plan work? Let’s find out.

For marathoners, triathletes and other serious athletes, carb cycling can be an effective way to train, says Patton.

The reason? Carbs equal energy in the world of athletic performance. Your digestive system breaks down carbs into glucose, or blood sugar. Your body absorbs glucose and uses it to fuel to power muscles.

“When you’re an athlete, your body is more efficient and your metabolism is pretty high,” explains Patton. “If your workouts are high intensity, you’ll need the extra fuel. You’ll burn through these extra carbs.”

Carb cycling can be adjusted to training schedules, says Patton. There’s no one way to do it.

Some may opt to try a scripted five-day plan. With this method, you eat a low amount of carbs for three days (averaging about 100 grams [g]–125 g each day) then follow with two high-carb days (175 g–275 g) and increased physical activity.

Others take a simpler approach: Just eat more carbs on big workout days to optimize energy and minimize fatigue. On lower-intensity days, dial down the carbs to keep your weight in check.

And in regard to weight, be aware that you might gain pounds on high-carb days even with the increased physical activity due to increased carbohydrates stored in your muscles. “Again, though, carb cycling isn’t meant for losing weight,” notes Patton. “It’s about fueling your body.”

What can you eat while carb cycling?

Foods that contain good carbs include:

How to count carbs

Many fitness-tracking devices allow you to track your daily food intake and count calories.

Or you can use one of the many apps available online. Patton says Cronometer™, MyFitnessPal™ and Lose It!™ are helpful.

“There’s nothing dangerous about carb cycling in the short-term,” says Patton. “But it’s important to also follow an overall nutritious diet so your blood pressure, sugar and cholesterol levels remain in a healthy range.” SXSW to make international debut in Sydney in October 2023